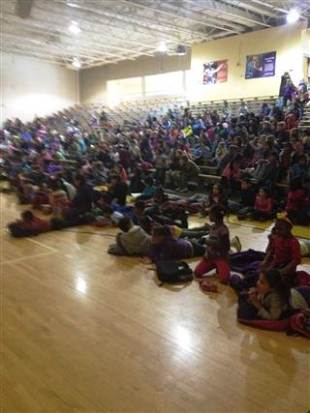 When one becomes principal of a school in Atlanta, the last thing he would predict as part of his job would be spending the night at school to make sure his students are well cared for, but that is exactly what Matt Rogers did on January 28, 2014. Actually, he did more than care for his 94 students who couldn’t get home after the snow started: he and the 31 other adults at school, mostly teachers with a few bus drivers and parents, decided to throw the kids a party. Rogers said, “We had a snowcation. A little mini snow vacation overnight.” I love his optimistic and adventurous spirit!

As the snow continued to fall outside and darkness settled, the students ate pizza, watched Free Willy, and had a paper airplane-making contest. Students then slept on the gym floor on tumbling mats while teachers covered them with whatever they could find including tablecloths and Rogers own dress coat. Teachers like Lindsey Treharne stayed up most of the night manning the phones and making sure students were okay. A visit to E. Rivers Facebook page shows posts of what the students were doing and reassuring parents.

The most amazing part of the story for me though is what happened the next morning. After being up all night and feeding students breakfast, Rogers initiated a snowball fight with the kids saying, “They were anxious to get out in the snow.” I love this second-mile service and the ability to make the most of a moment. I want to be this type of parent, friend, and educator.

Treharne describes the night by saying, “We were hugging a lot of kids and letting them know that this was an adventure they would never forget.” She continued, “With my kids I give them a sense of family all the time . . . . I wanted to make sure they were safe here. It was just something you sign up for when you become a teacher . . . You’ll take care of your children whenever necessary.” 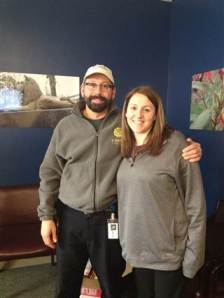 So while an artic blast moved through Atlanta chilling and immobilizing the city last week, some educators were given the chance to show their deep commitment to students. Rogers refers to his teachers as “rock stars” and describes the evening as “memorable.” Typically, students learn from teachers, but in this case, adults are the ones who should take note and learn.

What is keeping you from being a rock star parent or teacher who takes less than desirable situations and turns them into a party?