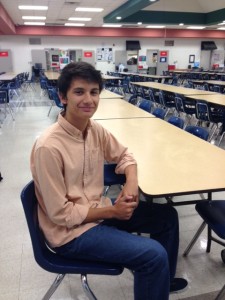 Once again the teacher is learning from the student. I never cease to be amazed by students and want to relay a story told by a National Honor Society officer at this week’s induction ceremony. Eduardo spoke on leadership, and I am paraphrasing his story with his permission.

On his first day of middle school, Eduardo wanted to be associated with the “cool” kids. Who doesn’t, right? While elementary school kids establish social status on the playground, middle school kids flesh out peer groups in the cafeteria.  Eduardo and his friend Terry entered the cafeteria and sat at a table by themselves when some of the cool kids called for Eduardo to join them. Quickly, he and Terry changed tables only to realize the invitation was just meant for Eduardo. One student asked Terry, “Why are you sitting here? Do you really think Eduardo is your friend?”

Eduardo went on to tell of how he hung his head but did not defend his friend. Wanting to be accepted by the popular kids, he chose silence. When confronted by Terry later about the situation, Eduardo said, “I didn’t know what to do” to which Terry replied, “You could have said, ‘yes.’” These five words changed Eduardo’s life. He has since lived his life choosing to say “yes” to people and realizing that true leadership lies not in telling others what to do but by setting an example.

I love this story for many reasons. First, I love that a senior in high school has the vulnerability to share what he calls a humiliating story in a very public setting in order to challenge and encourage others. I love that a middle school student not only realized that he demonstrated poor character but was introspective enough to learn from it. I love the emotional fortitude of this student who continues to live by the “you could have said ‘yes’” principle as I have seen him demonstrate this over and over.

How can you say “yes” to the next generation?

Offer a safe environment for students to speak about peer pressure.

Listen to a student.

Give students gifts that focus on relationships as opposed to material possessions.

And lead by example. Peer pressure does not end at graduation. Spend time getting to know people other than the “cool kids” in your neighborhood or at your workplace.

Who is one student you can say “yes” to this week?