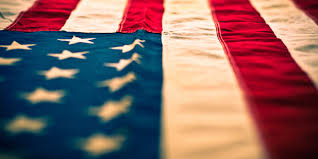 Fun fact: the Fourth of July is my favorite holiday. The Peachtree Road Race, Braves baseball, fireworks, southern BBQ, country music, watermelon, and sweet summertime make for the perfect holiday. And even though many naysayers moan and groan about the state of our nation, celebrating freedom and democracy never grows old. An added bonus is the Fourth of July is not a religious holiday, so my husband is not working – woo hoo for freedom from work for both of us on the Fourth!

If you’re in the mood for some patriotic reading, I’ve got some recommendations for you. I’ve included different lengths and genres, so if you have two minutes or the entire month of July, one of these will work for you. I narrowed the list to 10 choices but could have easily done 20 and debated including works such as “I, Too” (Hughes) which I love and love to teach and The Great Gatsby (Fitzgerald) which I don’t love as much and don’t care to teach. These are in no particular order, and I’ve included links to either the work.

1- All-American Sestina lives up to its name. This poem celebrates iconic Americana. Don’t let the word sestina scare you away; this is a simple poem. If you would like to know more about the format of sestinas, a̶s̶k̶ ̶a̶n̶y̶ ̶o̶f̶ ̶m̶y̶ ̶f̶o̶r̶m̶e̶r̶ ̶A̶P̶ ̶s̶t̶u̶d̶e̶n̶t̶s̶, I’ll be happy to give you a quick lesson.

2 – The Meaning of July 4th to the Negro is a speech given by abolitionist and former slave Frederick Douglass. Wow – just wow. Douglass was asked to give this speech to commemorate the signing of the Declaration of Independence on July 5, 1852, and he spoke TRUTH to people who needed to hear it (including the church). Go, Douglass!! If you’ve never read his autobiography The Narrative of the Life of Frederick Douglass, it’s a must read!

3 – “I Hear America Singing” by Walt Whitman not only celebrates the roles of individuals in society but also the working class of America. I typically have my students rewrite this poem as “I Hear a High School Singing,” but high schools – as much as I love them – are not as great as ‘Merica. For an added bonus read “O Captain, My Captain”.

4 – Moneyball by Michael Lewis tells the story of Billy Beane and his role with the Oakland A’s. Lewis is an amazing storyteller; I was reading him way before he was cool and with good reason. Patriotic, you ask? Read this book while eating apple pie a la mode, and you’ll feel as American as ever.

5 – 1776 by Pulitzer Prize winner David McCullough details the year the in which our country gained independence and tells the story of those who made this possible. McCullough is detailed yet narrative while telling the story of not just individuals but a nation.

6 – The  “Gettysburg Address” is Lincoln’s most famous speech honoring those who gave their life during the Civil War while fighting for the right for all men to live in freedom and as equal citizens. Ironically, Lincoln says, “The world will little note, nor long remember what we say here . . .” which now is etched in the walls of the Lincoln Memorial. His words live on and force us to remember.

7 – Alexander Hamilton by Chernow is my current read, and it’s a good thing because I cannot afford to go see the musical. My online book club (how cool and equally nerdy is that) is reading this book for July, and I’ve just started but am excited to be reading out of my typical genre. It’s the number 1 non-fiction book on the New York Times Bestseller list so jump on the bandwagon and read this with me.

8 – I Have a Dream by MLK screams equality, justice, and patriotism. Just as children grow and learn so do young nations, and America has had some learning to do. This classic speech educates us on what freedom looks like for everyone.

9 – Patrick Henry’s Speech to the Virginia Convention is my favorite historical text to teach. Henry is a master of rhetoric, and I get chills every time I read it. “Give me liberty or give me death” show his passion and conviction. This speech reminds me of the significance of speaking up, speaking out, and speaking boldly.

10 – On the Road by Kerouac is a tale of two friends traveling across America. Slightly irreverent but fully authentic, Kerouac questions what freedom really is. His language is beautiful and his message is heartfelt and personal.

Discuss patriotism, freedom, and our nation’s journey with your family and friends and may we not take this great country we live in for granted.

What is your favorite patriotic reading?

And an added bonus – the Independence Day speech. President Whitmore is spot on issuing the charge to troops before they go to kick some alien arse. I love this movie, and the Fourth of July is not complete without it.